Toronto, ON — Transit, the leading app for getting around Toronto without your own car, and Communauto FLEX, Toronto’s point-to-point carshare service, announce a new partnership today that makes it easier than ever for Torontonians to get from A-to-B without using their own cars.

Starting today, users of Transit, available for free in the App Store and Google Play, can see the nearest Communauto FLEX vehicles available — then reserve, unlock, and complete their trips, all from within Transit’s app using their Communauto FLEX account. 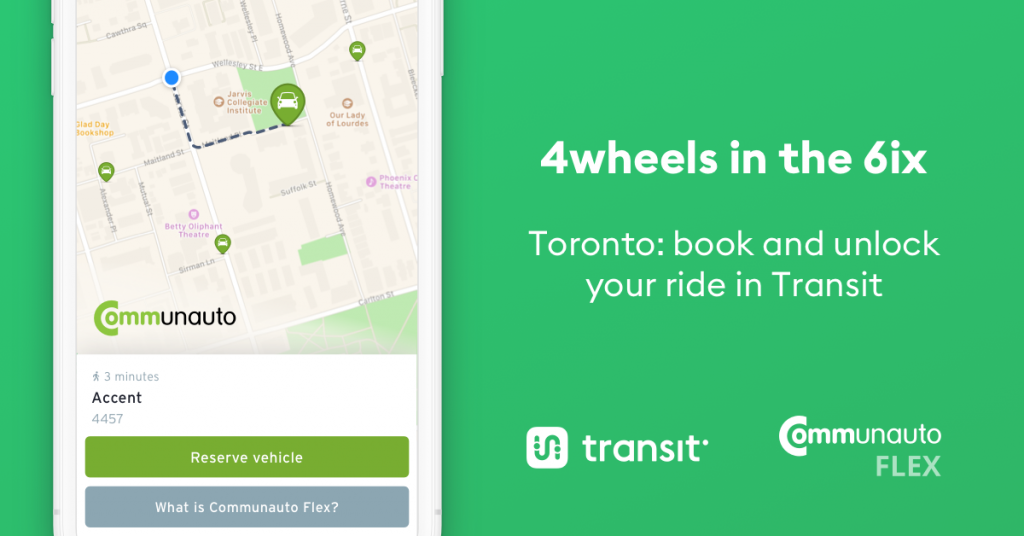 Users simply tap a Communauto FLEX pin on the map showing the nearest vehicle, reserve the car with a single tap, walk to the vehicle, and tap in Transit to unlock the car. Once the trip is complete, users can end their trip by tapping a final time in Transit.

To celebrate this new addition, Transit users who sign up for Communauto FLEX for the first time receive $20 in driving credit using a special promotional code.

Connecting Torontonians with Communauto FLEX is a natural next step for Transit. The app already integrates realtime information for the TTC, GO Transit, and all major transit operators in the Greater Toronto Area. It’s also completely integrated with Bike Share Toronto. Since 2016, Transit users have purchased passes and unlocked bikes with Bike Share Toronto more than a million times. Today, 40 percent of Bike Share Toronto trips are unlocked with Transit. Transit is also integrated with Uber, allowing users to hail and pay for a ride to the nearest transit connection within the app. Transit has also recently added a feature that allows users in Ontario to purchase transit tickets within the app, starting with the St. Catharines Transit Commission.

“By making it easier to access carshare in the app that hundreds of thousands of Torontonians use every week, we’re expanding the reach of point-to-point carshare and reducing the need for people to own their own cars.”

“Communauto’s mission is to provide an affordable and practical alternative to car ownership in combination with transit, biking, walking and other alternative transportation,” said Marco Viviani, Vice President of Strategic Development at Commuanuto. “Technology has a big role in making this possible and this partnership with Transit allows us to make the multimodal experience we want to provide more and more seamless.”

Transit is available in the App Store or Google Play, or by visiting www.transitapp.com.

About Transit: Transit solves the urban commute in more than 200 cities worldwide. Users can easily navigate public transit with accurate realtime predictions, simple trip planning, and step-by-step navigation. The app also integrates other transport modes — bikesharing, carsharing, scooters and ridehail — so users can determine the best way to get from A to B. The company is based in Montréal, QC. You can learn more by visiting www.transitapp.com.

About Communauto: Founded in Quebec City in 1994, Communauto is the longest running carshare service in North America and the one serving the largest number of communities in Canada.

With a fleet of more than 2,000 vehicles, the company serves 13 cities each one with a local approach. Among these are Edmonton, Waterloo Region, Hamilton, London, Guelph, Kingston, Ottawa, Gatineau, Montréal/Laval/ Longueuil, Quebec City/Lévis, Sherbrooke, Halifax, and Paris in France. Communauto group operates gas, hybrids and electric cars and offers both roundtrip and freefloating carsharing.