“2019 has been a great year and we are continuing on this path in 2020. Communauto is becoming more than ever the benchmark player for carsharing in Canada.” It is in these terms that the president and founder of Communauto, Benoit Robert, commented on the organization’s results in 2019 and its many projects for 2020.

“Over the past 3 years, we have more than doubled the number of registrations in Canada and France. These outcomes are the result of the increased interest in carsharing and the addition of new cities to Communauto’s offer, such as Toronto and Edmonton,” added Benoit Robert. 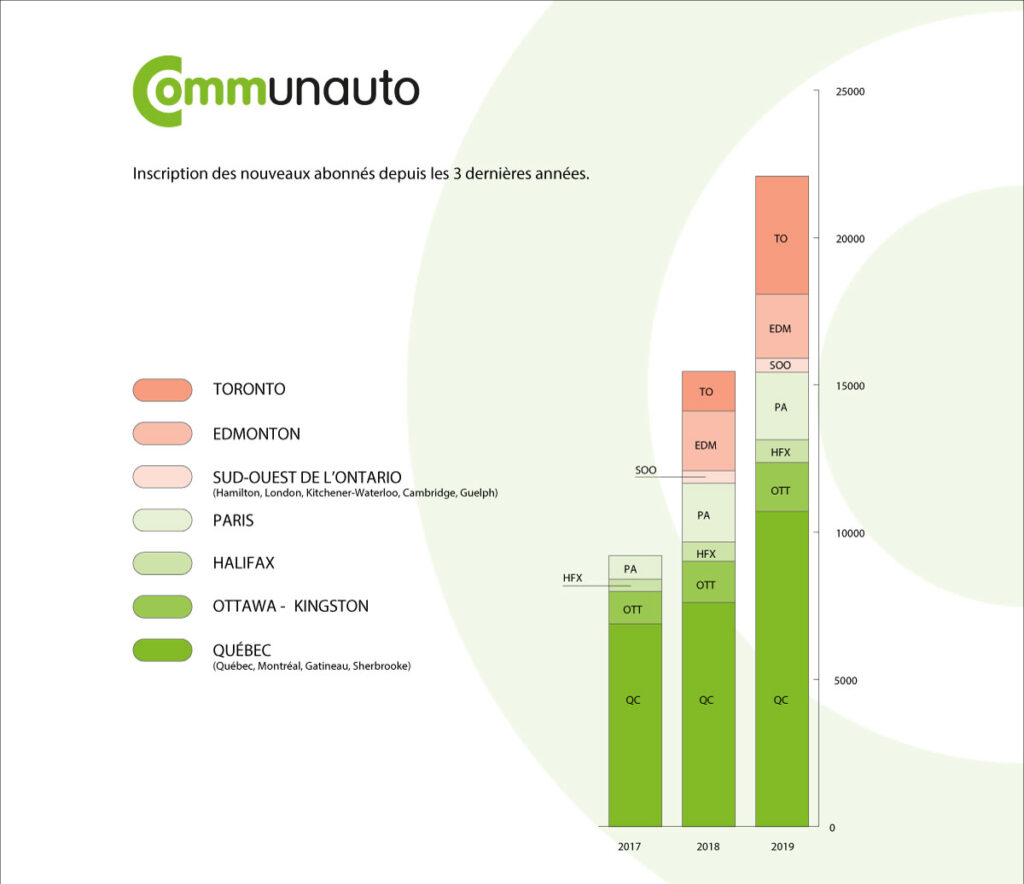 In order to meet demand, Communauto is purchasing 700 vehicles, which will be added to the almost 3,000 vehicles already in its fleet at the start of the year. The cities that will benefit the most are Montreal, Quebec, Halifax, Ottawa, Edmonton and Toronto. 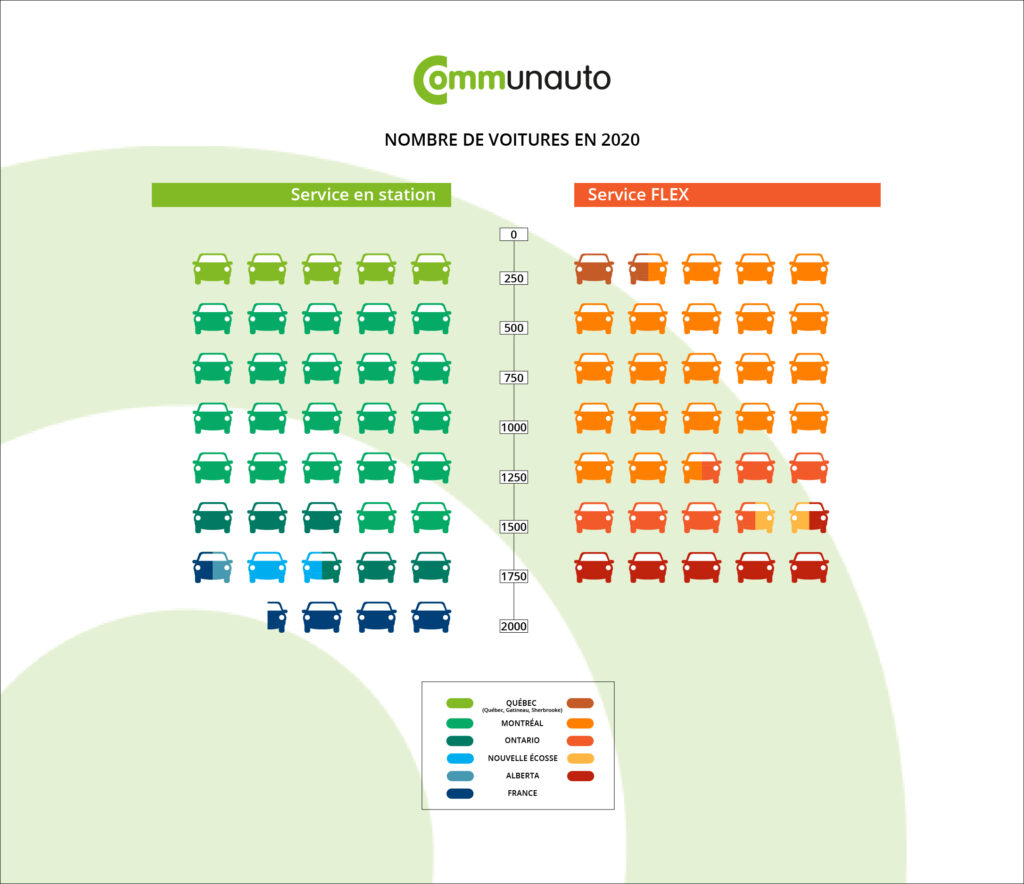 “Carsharing and free-floating vehicles significantly reduce the use of the solo car. Our administration hopes to encourage the deployment of these services on the territory of Montreal. The fact that users can now park vehicles in front of downtown parking meters is a concrete example of the regulatory changes we have made to develop an efficient and user-friendly model,” said Éric Alan Caldwell, responsible for urban planning and mobility within the executive committee of the City of Montreal.

Around 150 cars will be added to the station-based offer, for which demand exceeded all expectations in 2019.

Regarding the FLEX offer, following the departure of ShareNow announced last December, Communauto reacted quickly by ordering 325 vehicles which will be added to its free-floating offer which already included 730 units.

120 new FLEX vehicles have already been put into service since January, bringing the offer to 850 units, compared to the 460 vehicles operated by ShareNow. The other FLEX cars will arrive between March and May. They will be Toyota Prius C hybrids and Kia Rio’s.

Communauto will also slightly modify its service area in the neighbourhoods already covered, to better accommodate former ShareNow users, in the following sectors:

FLEX drop-off points may also be added to the South Shore during the year.

Pilot projects for downtown, Rosemont – La Petite-Patrie and Le Plateau-Mont-Royal with the City of Montreal

A pilot project will be launched in the summer of 2020 in collaboration with the City of Montreal and the Agence de mobilité durable that will allow Communauto to integrate parking meters into its application. This will allow users of the FLEX service to free their vehicles in front of the parking meters in a large area of downtown. The pilot project will make it possible to validate the hypotheses in order to establish a modus operandi and the fixed pricing which should eventually apply to make the measure sustainable.

Also, the boroughs of Rosemont – La Petite-Patrie and Plateau-Mont-Royal are evaluating with Communauto new approaches to significantly increase the supply of on-street stations for vehicles offered by reservation (the LSR component of the offer), the expansion of which is currently hampered by the lack of available commercial parking. In these two boroughs, 14% and 10% of households use the services of Communauto respectively.

In addition to an increase of 40 vehicles for the station-based offer, the FLEX component will see its fleet increase by 50% (+25 vehicles) in Quebec City. The service area will also be extended to the Maizerets district, once the new snow removal regulations are confirmed.

As announced in the fall, 2020 will be dedicated as the year of the relaunch of the partnership between the Réseau de Transport de la Capitale (RTC) and Communauto. The first part of this enhanced partnership has already been implemented with the opening of new stations in 6 Parc-O-Bus and by a first phase of integrating Communauto data into the real time RTC Nomade application. Communauto also improved the package offered as part of its “Duo Auto + Bus” offer by adding the option of “free late returns”; the possibility of keeping the car overnight at no additional cost.

To support these initiatives, during the year the RTC will add to its services an “integrated package” which will add to the general monthly RTC transportation pass a FLEX pass, including 10 trips of 30 minutes or less (the trips only become billable after the 31st minute) at a cost of $99.

In the absence of FLEX vehicles, the supply of vehicles accessible by reservation will be significantly improved in Gatineau and Sherbrooke, with the addition of ten new cars in each region.

Communauto persists again this year with its aggressive pricing approach in order to be in the best position to offer an alternative to owning a vehicle.

No changes are planned in the vehicle usage fees for the basic FLEX plan, which is free. As for the other packages, only a few adjustments will be made to the prices per hour or per day (between 10 ¢ and 40 ¢ /hour and $0.80 and $1.30 /day), in order to follow the changes in the cost of inputs (price of insurance, maintenance, etc.) but above all to better position packages in relation to each other.

Some new features will be introduced:

This latest measure, recently introduced in Edmonton, will allow, in Montreal, to increase the number of vehicles accessible to these users by more than a thousand, in addition to the thousand FLEX vehicles to which they will already have access (i.e. more than 2,000 vehicles available, total, in the Montreal region only). This package will, for the occasion, be renamed “Open Plan” and the current Open Plan “Open Plus Plan.”

The price of the FLEX Unlimited Pass will be increased by $10, which can be amortized in a single monthly trip.

Remember that the FLEX Unlimited Pass is a unique product in the industry. Like the BIXI model, this pass allows its holders to make an unlimited number of trips of 30 minutes or less for a flat rate which will vary between $45 and $70 /month, depending on the membership plan.

This product is a good illustration of Communauto’s approach of looking for innovative ways to better meet the mobility needs of its users in a flexible and efficient manner, while ensuring the economic viability of its business model.

Communauto will complete in 2020 an overhaul of its image that will allow it to present itself on a Canadian scale with a unique national brand, strengthened by its presence in 4 provinces and fifteen cities from Edmonton to Halifax, without forgetting its presence in Paris since 2012.

In parallel with this operation, technical developments will allow access to all the cities in the network through a single membership.

Until this is possible everywhere (it is already possible between Quebec, Ottawa, Kingston and Southwestern Ontario), Communauto has simplified the registration process for other branches by introducing a new unique promo code (INTERCO) which will allow members to benefit everywhere else from the equivalent of their Communauto plan (or what comes closest to it if it is not offered locally), free of charge and without having to provide their driving records again.

The unanimous vote of Calgary City Council on February 3 gives Communauto the opportunity to launch its FLEX offer in Calgary. The service is expected to launch in May or June.

The Infrastructure and Environment Committee of the Toronto City Council will decide in March on the continuation of the pilot project started with Communauto in November 2018. If the City confirms the project, the FLEX vehicle fleet will increase from 200 to 300 units.

Communauto continues to support independent research in order to document and publicize the impacts of carsharing. In 2020, Communauto renewed for an 8th year its support for Polytechnique Montréal, to which it provides access to its data.

Internal research also allows to better measure the effects of the service: a recent survey, done in Toronto, established that for each Communauto FLEX vehicle, users had given up buying 3.81 parking permits, freeing up space for other uses.

Next May (May 28-29 in Vancouver), the Carsharing Association’s international conference, supported by Communauto, will allow researchers from around the world to come and share the fruit of their most recent research.

Founded in Quebec in 1994, Communauto is the oldest car-sharing service in North America and the one that serves the largest number of communities in Canada.

Communauto was the first company in Canada to give its customers access to a large fleet of 100% electric cars and to set up combined offers with public transport service operators.

Present in 16 cities, 4 Canadian provinces and on two continents (Edmonton, Toronto, Kitchener, Waterloo, Hamilton, Guelph, Cambridge, London, Kingston, Ottawa, Gatineau, the regions of Montreal and Quebec, Sherbrooke, Halifax and Paris in France), operating a fleet of nearly 3,000 vehicles, Communauto is also one of the few operators in the world offering its customers access to free-floating vehicles available without or with reservations (LSR). Studies on the issue have shown that the combination of these two offers optimizes the positive impact of the service and that each carsharing car replaces, in Quebec, on average, ten private vehicles.